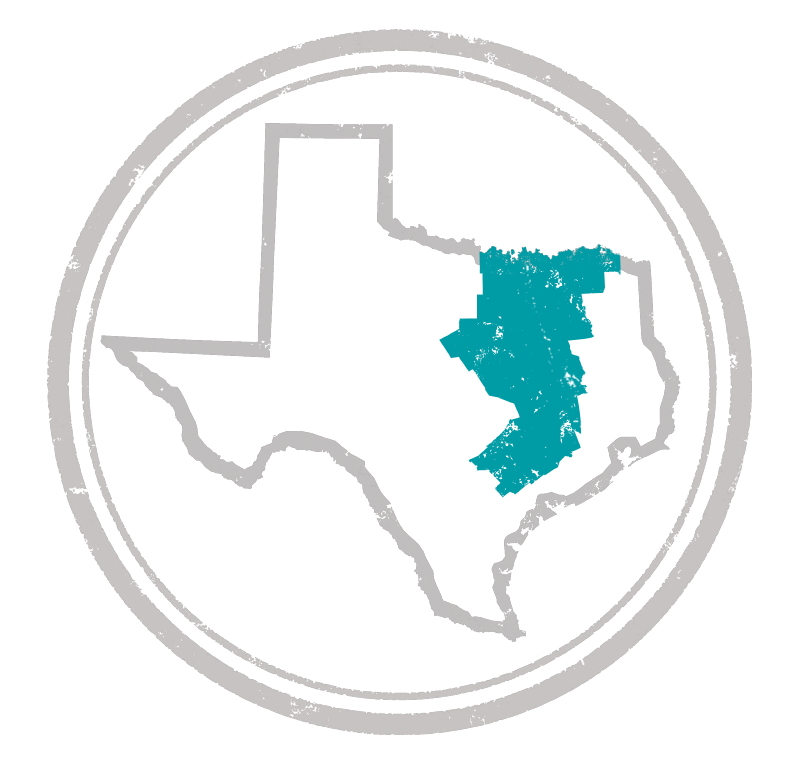 From fast-moving rides to slow-moving experiences, the heartland of Texas offers something for everyone

Bluebonnet trails, a drive-in movie theater, and railroad nostalgia offer a respite from nearby Dallas

Growing up, I often felt like I lived on Interstate 45, traveling frequently between home in Dallas and a large extended family in Houston. “Ennis” was a sometimes-welcome sight on a highway sign—a signal for how close we were to our destination or how far we still had to go. But considering its proximity to Dallas—only 35 miles south—Ennis was never a convenient stop. That’s how I found myself an adult before I walked the charming streets of Ennis for the first time.

Founded in 1872 by the Houston and Texas Central Railway, Ennis is a product of two pillars of Texas’ 19th-century economy: cotton and the railroad. While Ellis County is no longer a top cotton producer, the railroad still plays a role in connecting Ennis’ thriving manufacturing industry with the world.

In 2013, a tornado carved a destructive path through downtown, spurring city leaders to develop a five-year community-­improvement plan focused on renovating and restoring the historic downtown, creating new public spaces, and expanding development opportunities. As part of this effort, Ennis also decided to rebrand. With the help of locals, the city chose a new slogan: “The bluebonnet spirit of Texas.” The area’s swaths of wildflowers have long been the pride of the community: In 1997, the Texas Legislature named Ennis the “Official Bluebonnet City of Texas.” Today, visitors flock to Ennis not only for springtime wildflower drives but also to explore downtown’s historical roots.

Hotels in Ennis come in one variety—­limited-service economy—so the best way to get a feel for the local flavor is to book a room at one of the area’s bed-and-breakfasts. The Hoefer House is located in the heart of the city’s historic district. The home has been renovated and restored and is now filled with classy country-style décor and cozy amenities. If you’re looking to get away from town, Winding Ridge B&B offers a cozy ranch-style stay on 22 acres along the city’s bluebonnet trail. Interact with horses, donkeys, and goats on the property, and relax in a clawfoot tub.

While car culture thrives in Texas, drive-in movie theaters were left in the dust following their peak in the 1950s. But Ennis is one of the few Lone Star cities where you can still watch the latest blockbusters from your driver’s seat.

The best time to pull in to the Galaxy Drive-In, located off I-45 just north of town, is around twilight. That way you’ve got a bit of daylight to purchase double-feature tickets ($8; $4 for 12 and younger) to one of seven screens and then wind through the labyrinthine lot. The movie slate may be filled with current hits, but the concession stand features old-school American classics. Dine on burgers, nachos, and popcorn in the comfort of your car for a whimsical night at the picture show.

Start your next day at Heavenly Donuts for unique pastry designs and hot cups of coffee before checking out Minnie McDowal Park. The pocket park holds a special significance for locals, who remember when the site was home to the city’s only indoor movie house, the Plaza Theatre—later known as the Tara—for more than 60 years. The building was demolished in the 1990s after suffering irreparable storm damage, and the city dedicated it as a park and named it for one of the theater’s most beloved employees. The park now features family entertainment on Saturday mornings, like magic and comedy shows.

After you’ve gotten a taste of the town, start your shopping spree at Home­feathers­ & Co., which offers a selection of home décor and furnishings, candy and other foods, and boutique clothing. For more clothes shopping, head to Felcman’s, a historic dry cleaner that doubles as a clothing and home décor shop. Opened in 1920, the shop occupies a plot in historic downtown Ennis.

To truly get to know Ennis, a trip to the Ennis Railroad & Cultural Heritage Museum is a must. Located along the tracks on the eastern edge of downtown, the museum is housed in the former restaurant that served rail passengers in the early 20th century. The museum is a time capsule of Ennis’ early days with educational displays, artifacts from the golden age of train travel, and exhibits on city history and hometown heroes.

When it is time to refuel, grab lunch at Home Grown Market, where proprietor and chef Lucy Braddock specializes in products made from the Wagyu beef raised locally by her father. Assemble a selection of meats, cheeses, and picnic items (the homemade pastrami is a must) or order one of the lunch menu items like Wagyu roast beef or pimento cheese and bacon sandwiches. Braddock left Ennis after high school, but she returned to her hometown to open the butcher shop in 2018. “I came back to a different town than I left,” she says. “Now, there’s a lot more to do, there’s a lot more life going on, [and] a lot more festivities than just football.”

Though Ennis has only around 20,000 residents, it has big ambitions for its cultural offerings. Two local theaters, the Ennis Public Theatre and Theatre Rocks!, stage impressive lineups of plays throughout the year starring local thespians. For visitors who prefer a little more high-octane entertainment, the Texas Motorplex has been hosting drag racing events on its quarter-mile concrete track since 1986. For a slower evening, relax with a glass from Sugar Ridge Winery and Bistro, the town’s oldest winery.

Most downtown Ennis establishments close on Sundays, so it’s the perfect day to explore the great outdoors in this piece of the North Texas prairie. The first stop is Veterans Memorial Park, which honors U.S. service members who gave their lives in conflicts ranging from World War I to more current wars. The memorial is a tranquil spot, and the surrounding park is seeded with 40 pounds of bluebonnet seeds each year.

While the wildflowers can start popping up as early as mid-March, they usually reach their peak around San Jacinto Day (April 21). When the flowers are in full bloom, set out on a country drive through more than 40 miles of mapped bluebonnet driving trails—the Ennis Welcome Center provides maps. “I love that people come to Ennis to see the vast amount of beauty we offer,” says Sandy Anderson, chair of the Bluebonnet Trails, a project of the Ennis Garden Club. She remembers one globe-trotting visitor who told her after a wildflower tour, “I’ve been all over this world, and I have not seen anything more beautiful than what I saw today.”

Nestled on Lake Texoma north of Dallas, this is the kind of place you go to catch a few fish or watch a spectacular sunset. Walk or bike more than 4 miles of trails. Ride all-terrain vehicles or dirt bikes through beautiful backcountry woodlands (with required permit). Relax or swim at a pristine beach inside a cove surrounded by towering limestone cliffs. Sleep under the stars or reserve “Ike’s Cabin,” which has bunk beds and sleeps up to five people.

Browse all attractions in the Prairies and Lakes region. You can also search for an attraction or city by name on the search listings page.